On The Power of Song

Yesterday, for the second time, I got the opportunity to play my original song at The Houses of Parliament. This is why and what happened …

My daughter, Liberty, died in 2011 and I wrote a song for her soon afterwards to express, (or perhaps to make sense of), what to do with the only thing I had left of her – A limitless amount of love. The song is called ‘I Can Love You From Here’ and I had played it at various informal events, but it had not really had any kind of platform for people to hear it outside my friendship group or my students.

This changed last October, when I was invited to sing it for a ceremony to mark Baby Loss Awarness week at The Chapel underneath The Houses of Parliament at Westminster. This came about because my husband has been involved in charity work for Tommy’s who are working to save babies lives. He then became a member of an ‘All Party Parliamentary Group’ for Baby Loss Awareness which is a committee formed from MPs, health professionals and a great many children’s and baby charities. The response I had from that performance convinced me to record the song and it will be released for charity this coming October.

So, on Tuesday evening, I found myself attending an APPG to play them the finished record. This meeting took place in a large committee room lined with enormous paintings at The Houses Of Parliament. It wasn’t easy to get there! I queued through the airport security system to get in and argued and begged that they let me bring in my speaker which they planned to confiscate. Eventually, I made my way through a labyrinth of ancient halls and corridors just in time to enter through an enormous door (phew! – the one for the public – there is a separate one for MPs), and join the biggest committee meeting table I’ve ever seen. 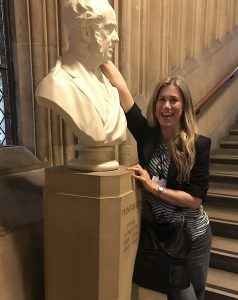 Between the various MPs and many high-profile charities present, it was pretty intimidating! We sat through a pretty meaty agenda covering things like; changes in the law which will affect whether or not coroners can investigate stillborn babies deaths with or without parents’ consent, a huge new NHS research study which has outcomes meaning maternity wards will change the way they operate so that sick babies in neonatal wards can always remain with their mothers, (it impacts their ability to survive), and approving a case that had come to one MPs office, to allow a police authority to exploit a loophole in the law in order to prosecute a driver who had killed an unborn baby under the ‘death by dangerous driving’ legislation for the first time in the UK.

Anyway, as you can imagine, I was feeling a little intimidated about being on the agenda to play a simple song.

When it was my turn, (last on the agenda), I grabbed my laptop and speaker and took my seat at the head of the table next to Antoniette Sandbach MP (co-chair, very impressive woman and bereaved mother), and I gave a brief presentation and played the song. At line one of chorus one, Antoinette began to cry and was openly sobbing by the end of the chorus so, of course, I took her hand. By chorus two, many in the room were in tears. At the end of the song the entire energy in the room had changed. We all marvelled at the power of song.

I gave the rest of my presentation and received enthusiastic support from everyone there. All the charities are keen to actively help to promote the record and have access to it to support parents, families, funerals, ceremonies and the grief process. With a background in the record business and a career in teaching songwriting, I’ve sat at a wide variety of tables and listened to a wide variety of songs with a myriad of different reactions and feedback expressed. But this was something else entirely … Most of the room had a connection with baby loss of child bereavement but the simple human side of our experiences had not really been expressed or shared fully until we listened to the song together.

I got the feedback that I needed – the record works as well as the song sung live.

I got what I went for – the full support of the MPs and charities present.

But I got something even more valuable which was the most powerful experience I’ve ever had of sharing a song.

The song ‘I Can Love You From Here’ will be released October 2019 as part of an EP project with the same name and under the artist name ‘Liberty’s Mother’.

Sophie Daniels is Head of Songwriting at ICMP in London where she founded the songwriting provision in 2004. Her early career was in songwriting, performing, teaching and the record industry, holding marketing roles at the major labels; Sony UK and S Records where she worked directly for Simon Cowell.

More recently at ICMP she launched the MA in Songwriting and her primary teaching interests are in Creative Process and the broad, non-commercial and research applications for Songwriting Practice. Sophie travels to Nashville regularly and co-writes with singer/songwriters in the areas of Folk, Pop and Americana. Her new project is ‘Liberty’s Mother’ which is a not for profit EP release due in October with the charity ‘ Tommys’.